A PLACE AGAIN A PLACE MAYBE

FIVE
The reason for opening with these two photographs is that I am reading Yves Bonnefoy's THE ARRIERE-PAYS, published by Seagull Books.  A beautiful book of prose and full colour illustrations.

A book of meditations for want of a better word  on a place, a place where one discovers the self, the place not known, probably unknowable, yet we receive hints and these hints disappear, a book to go back to and back to and to read and to read...unlike the books that accumulate in beach houses never to be re-read.  But more than that, of course 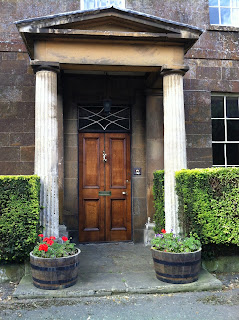 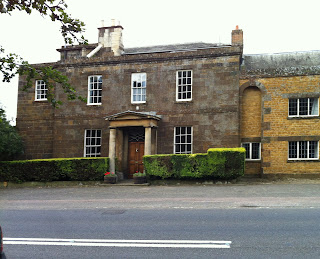 Here is Bonnefoy:  "...that is what I dream of, at these crossroads, or a little way beyond them--- and I am haunted by everything that gives credence to the existence of this place, which is and remains other, and yet which suggests itself with some insistence even.  When a road climbs upwards, revealing, in the distance, other paths among the stones, and other villages; when the train travels into a narrow valley, at twilight, passing in front of houses where a window happens to light up; when the boat comes in fairly close to the shore-line, where the sun has caught a distant windowpane (and once it was Caraco where I was told that the paths were long since impassable, smothered by brambles), this very specific emotion seizes hold of me--- I feel I'm getting close, and something tells me to be on the alert.  What are the names of those villages over there?  Why is there a light on that terrace, and who is greeting us, or calling us, as we come alongside.  Of course, the moment I set foot in one of these places, this sense of 'getting warm' fades away.  But not without it intensifying, sometimes for as much as an hour, because the sound of footsteps or a voice rose to my hotel room, reaching me through the closed shutters..."

Bonnefoy is on a journey, Italy, France, Greece, eventually in memory to Armenia... but the place first took shape in a book read in childhood, long remembered, but now lost... don't we all have these books?


The whole of Bonnefoy’s book is summed up, “I sought my true place, on this strange earth of ours, so prompt to satisfy my desires and yet so mysteriously disappointing.”

But where?: “it is the context of these undisciplined speculations that Italy became a part of the arriere-pays, and the place where I most abandoned myself to the dream.

In truth, I did find it hard going when he takes us into a discussion of dream.  I do not read about dreams.  Someone said once about dreams: that is why a shrink charges so much, nothing more boring than listening to a dream…

However Bonnefoy is aware of this and backs away all the time from dream, “I have resolved nothing , which can explain why I have remained a writer, writing being the wood that piles up as the fire starts to catch, in the smoke.  But one or two things I have understood… it consists in not forgetting the here and now in the dream of elsewhere, in not forgetting time, humble time as it is lived through here among the illusions of the other place, that shade existing out of time.

Yet always mentioning great artist ending in his listing Caravaggio…”and next to these, who have lifted off the tombstone from the imagination, there are others, crreators of great art also, divided within themselves, discouraged but still tenacious, not without the suffering which Baudelaire knew to be the illustre compagne, the noble companion, of the beauty be most prized.."

Bonnefoy ends his book with an evocation of Armenia based upon black and white photos of Armenian churches he remembered  seeing as a child and this thought about black and white photographs:  "I had the impression I had already  visited these churches, among their mountains, because the black and white  established a continuity with other memories from those ‘profound years’, reminiscences that seem to spring from ‘before we were ourselves.”…

The reason, by now you might be asking for those two photographs: taken in Deddington, near Oxford, Sunday afternoon in August, while taking a walk, while visiting the Oldfields... just stopped as Bonnefoy before certain paintings in Italy... a place, not the Mascot Dock in Patchogue, n

not, not, late night  walking across the Galata Bridge in Istanbul... or in Kyoto or in Dublin...  in Dublin... 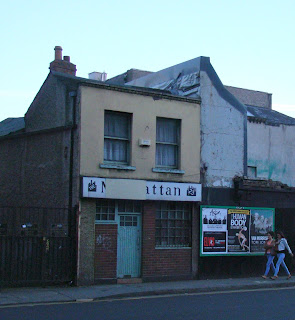 a picture saturated with memory of after the pubs eating on the way home... now forlorn only because of memory

When John O'Brien discovered that I was heading to Cape May, NJ for a week with extended family he sent this message:

AND IN 10, 15 YEARS, THERE WILL STILL BE THE BEACH, THE ENDLESS WAVES, THE SAND: ANDWE WILL NOT BE... A FADING MEMORY, REDUCED TO LITTLE STORIES, ANECDOTES, SEMI-ACCURATE, TWISTED TO MAKE THEM BETTER ANECDOTES, BUT THEN ABOUT PEOPLE (US) THAT NO ONE REMEMBERS, JUST NAMES IMAGINARY PEOPLE WHO ONCE WERE, STORIES TOLD BY PEOPLE WHO NOW THEMSELVES WORRY ABOUT HOW THEY WILL BE FORGOTTEN.

I suspect O'Brien is echoing Sorrentino... but I know when my son was talking about his 20 and 20 and 20 plan...20 years in industry, 20 years in a university and then 20 years teaching in a school like the school he went to Groton...I knew I would be there possibly only for the start of his first 20 year plan...
as when  we were at the beach  in the late afternoon...  that time around four when people are beginning to leave the beach...

I have with deliberation said nothing about those pictures from Deddington.
Posted by Thomas McGonigle at 11:08 AM 1 comment: