I walked out yesterday afternoon as it is always yesterday afternoon after a certain point and walked south from my slum apartment on East First Street.  This walking out is not possible in the suburbs---any suburb for that matter though of course I am thinking of the one where I now spend time.  In the suburbs it is always rare to meet other people walking, there are only other houses to look at and rarely does one see a person entering or leaving these dwellings.  I could not avoid thinking: feed lots, holding pens as one sees in the Arizona desert for cattle whose only destination is the knife.

To walk out from my place one passes the variety of people, the traffic, the shops and again on this walk the art galleries south of Houston Street.  This walking midst people dissolves the isolation one is always heir to... one's moods are shifted about as one can't avoid all of the possible versions of human life... and again I met no one I knew yet I was... 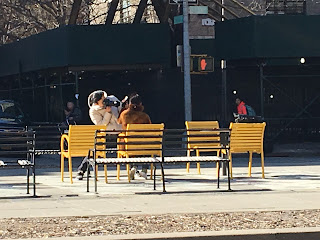 I saw in GALLERIE RICHARD  paintings by STEFAN HOENERICH which at first seem to be examples of photo-realism but then upon closer inspection they are of an invented realism and I had the impression of walking through streets near the Duomo in Milan--the narrowness of the streets and the profound gloom and feeling of being crushed by the stone faced buildings... and the absence of human figures in his paintings was as I felt, even though I was walking with Anna years ago in Milano--- to be sent right back into the isolated monad each person truly is... 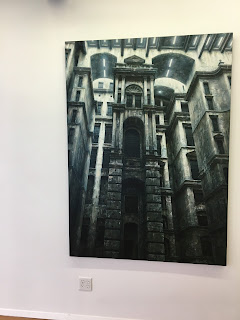 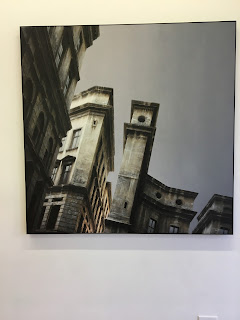 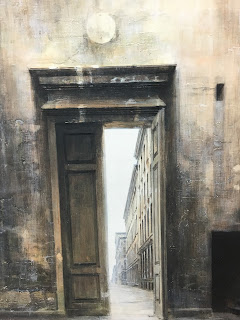 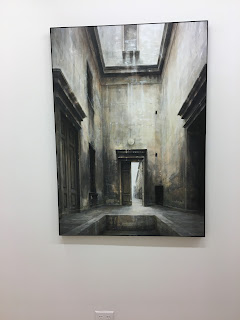 Though as in Milano when we came out on to the  square in front of Duomo and met our friend Marina, human sociability returned as it did for me crossing to the north west corner of Grand and Chrystie Streets and the Chinese market spilling out onto the sidewalks...

And while I looked into other galleries: Elizabeth Houston, Arsenel, Betty Cuningham, art.ltd, Artifact, Miguel Abreu... there remains ALDEN PROJECTS which was showing Eleanor Antin's 100 BOOTS: The Lost Picture Show.

Alden Projects had on display recently JENNY HOLZER'S Street Posters which reminded me of the time when SOHO was a place where art seemed to reside and when I lived at Prince and Thompson and worked at New Morning Bookstore on Spring Street ..but what it recalled more was the nature of so much of the art then:  its ephemeral nature, its discardability except for those who like myself save "stuff"...  and this show of Eleanor Antin's based in part on the mail art of that time also reminded this viewer of change, the constant change and the inevitable passing of buildings, "scenes", moments and one's own gradual disappearance--- but is that not one of the goals of great art to make the viewer understand this simple constant truth: you are going to die and this artist is also going to die YET with these objects, as frail  as they sometimes are have a real possibility of surviving  for a time.

I long ago discovered the pleasure of reading and looking at books that documented all the art which was destroyed in the two World Wars and then even with the very greatest painters.... one is always heartened in some mysterious way when certain paintings remain only as titles-- of course these artists have achieved that recognition that allows for such catologues--- and then one thinks of all the artists, writers for whom not even their names are to be remembered...

Note: Go to :www.aldenprojects.com  for


100 BOOTS: The Lost Picture Show opens on February 24th, 2017 (6 - 8 pm) and runs through April 9th at Alden Projects™. This exhibition presents recently discovered vintage photographs by Eleanor Antin from her personal collection, expanding our understanding of the peripatetic adventures of her most celebrated series, 100 BOOTS (1971-73).

100 BOOTS is a travelogue, along the lines of Huckleberry Finn or Jack Kerouac’s On the Road, featuring the cross-country adventures of 100 stage-photographed rubber boots—Army-Navy surplus boots. They are a unitary protagonist in an allegorical narrative that a then-contemporary audience easily connected with the Nixon era and Vietnam War. The work earned its initial underground reputation as a series of 51 components that were sent through the mail over a two-and-a-half year span, to between 600-1000 recipients, bypassing the conventions of reception and distribution. All of the postcards are accompanied by plot-driving titles, dates, and shooting locations, all printed verso. Bringing the war home in such a direct manner, 100 BOOTS was celebrated for its canny circumvention of the conventions of unique artworks well before the Museum of Modern Art invited Antin to exhibit there in 1973.

What is not widely recalled are the specifics of Antin’s multi-component MoMA installation of 100 BOOTS, which included three distinct sections. The largest in the North West Gallery was Crash Pad for 100 BOOTS (1973), an installation comprising a room-within-a-room, described in the museum’s exhibition materials as “a tenement apartment for the boots”…“complete with mattresses, sleeping bags, radio, and a front door equipped with a peep-hole and a chain lock.”[1] (Crash Pad for 100 Boots is presently in LACMA’s collection). Hanging in the Far West Gallery were the better-remembered 50 postcards (the final, 51st card captioned “100 Boots Go on Vacation,” was sent from California after the show closed). Also notably present were more than two dozen photographs of the “BOOTS adventures in New York” all of which are not otherwise pictured as postcards. The dimensions of the “photograph panels” are listed on the typewritten Checklist as “each approximately 20 x 16 in” (but also corrected by hand to read “each approximately 8 1/8 x 12 in”).

And so this exhibition sets out to clarify that the work we thought we knew so well—what the artist call’s “my fur tea cup”—extends beyond the four corners of the postcards. 100 BOOTS: The Lost Picture Show, curated by Alden Projects™ in collaboration with Eleanor Antin, brings to light “lost” and mostly unknown pictures of the boots in California and New York, most approximately the same range of scale as listed above. On view at Alden Projects™ are photo panels and vintage printed, gelatin silver prints, “showing the BOOTS adventures in New York”. (See below, 100 BOOTS Under the Brooklyn Bridge[1973].) Additionally, a number of arresting scenes of the  boots in California, also previously unknown, are also present. Notable among them is the cabinet-sized picture, 100 BOOTS at the Checkpoint, San Onofre (1972), depicting 100 BOOTS stage-photographed at an American immigration checkpoint near the Mexican border (and requiring considerable bureaucratic effort on the part of the artist to realize). In this picture, as elsewhere, Antin’s works are uncanny allegories of discomforting times, strangely familiar to our own. Standing together, we are reminded again that when sorrows come, they come not in single spies, but in battalions.

Alden Projects™ is grateful to the artist for the opportunity to work collaboratively on this special exhibition as well as to Ronald Feldman, the artist’s legendary, long-time dealer.

100 BOOTS is my fur cup. Think of the surrealist artist, Meret Oppenheim, and that strange, disorienting fur cup comes to mind. Many people react to 100 BOOTS like that. As Yvonne Rainer once said many years ago, oh, Eleanor Antin, she does boots. Happily, after half a century in the art world, most people are aware of my other works, many people even prefer some of my other works. Sometimes I do too. But I luv 100 BOOTS. He changed my life though it took me 2 1/2 years to realize fully who he was. He was becoming my female version of Kerouac's "On the Road". Two travel narratives, one bad boy literary, the other a leisurely visual odyssey from a respectable American town into a more dramatic, wilder, more dangerous place.

Somehow the images that didn't make it into the final piece were too dramatic, too overtly political, too suggestive of other meanings. So they remained photo prints, not postcards, and stored away in my studio where I forgot them for 50 years. Among them were images from their NY adventure when they moved into MOMA and which were shown at the museum in 1973 and never shown again. I vaguely remember some other MoMA prints but I never found them. Besides, after MoMA, I went on a hunger strike for my new piece "CARVING: A Traditional Sculpture". I was moving on. But when Todd Alden visited my studio in San Diego and told me how much he loved 100 BOOTS, my assistant Pam rummaged around into my deepest drawers and discovered those old photo prints sleeping way in the back. We were surprised. 50 years old and they look so contemporary and yet also suggestive of another time. Many of them have an angst that frankly looks uncomfortably like today.

Posted by Thomas McGonigle at 5:18 PM No comments: