GEZA OTTLIK: HOW NECESSARY HE IS

For many many years I have had a novel SCHOOL AT THE FRONTIER by Geza Ottlik in my library.  The novel was published by Harcourt Brace (A Helen and Kurt Wolff Book)  in 1966 and in spite of coming from such a distinguished house it was not reviewed in the US.

Over the years via there is the gradually dawning realization that from Hungary were coming writers who have lead me to write: if James Joyce were alive today he would have learned Hungarian as he had once learned Norwegian and it is probably no accident that Bloom is of Hungarian origin.

Only the stupid or poorly read are unaware and have not read the books of Sandor Marai, Imre Kertesz, Peter Esterhazy, Peter Nadas and  Laszlo Krasznahorkai...

The purpose of this brief post is to remind my few readers of Geza Ottlik whose writing and whose shadow is out of which come all of the writers I have just mentioned.  It took me years to find a copy of BUDA and then the making contact with the translator who tells me that the version of School at the Frontier was cut and at times is a little incoherent and needs to be freshly translated and he took the first step by translating BUDA that came out after Ottlik's death...

I won't go into the complex history of Ottlik, who during the very darkest days in communist Hungary was not allowed to publish... but for days now I have been living with this paragraph centered upon the central voice in the novel which is an attempt to describe the place of Buda in the lives of the characters readers first met at that school they all attended so long as  the nightmare of the 20th Century descended on Hungary and world--- and let no one think the 20th Century was anything more than another long murderous moment in the enduring --whatever you want to call human existence...

from the novel BUDA by Geza Ottlik:

..."my good friend, a writer in Buda, asks, "say BB how much longer are we supposed to live?"
---Listen, dear Bandi, dying is what I dread; me too, I'd like to get it over with.  The sooner the better. (A man's life may be seen as a urological episode: blood, stool, urine at the beginning, and it seems, at the end as well.) Meanwhile you will need a little more time to finish what you have started. (or to leave it behind in some semblance of order...) I turned my unfinished canvas around to face the wall so as not to see it all the time, and be influenced by what was good in it; I need something totally different here, something I cannot fully see yet; I'll find it eventually. (By myself, in my head.) I will.
The bad stuff in the painting does not disturb me.  What do I need here?...


Geza Ottlik wrote a brief article "On the Novel" from which...

"The novel attempts to create meaning on this side of language. How can it do this when it has nothing but language itself. First, language itself was born of a stratum on this side of language and is a derived system of signs referring back to that reality. Second, it is in itself a reality beyond language. For example, we simply retranslate its crude generalizations, its abstract functions, we assemble what it has torn apart and use it in its entirety. In the beginning was not the word but the sentence; it is this we break up into its component parts. In the beginning was not the sentence but the paragraph; it is this we expound into sentences! In the beginning was not the paragraph but the novel, and the novel was preceded only by silence itself."

Today, I went to look at art on West 24th Street in Manhattan 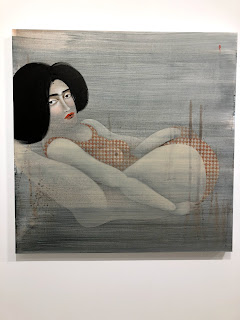 I resisted the temptation to add words to these photographs of the art. 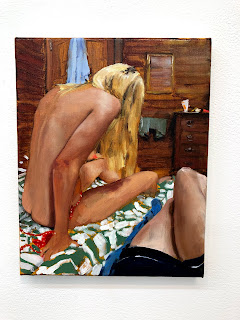 I also resisted putting the artists name on any of the pictures of their art. 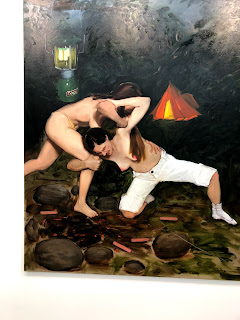 I am not sure of this absence as I am sure each of these artists wants to have words found for their art. 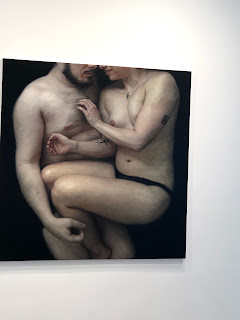 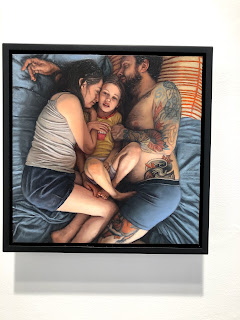 I am surprised by the content of some of these pieces of art. 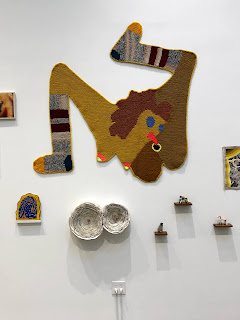 Have I revealed myself in the taking of these pictures 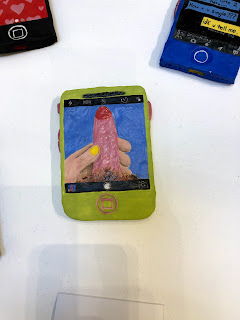 The pictures were of art that was in the galleries on West 24th Street between 10th and 11th Avenue in Manhattan. 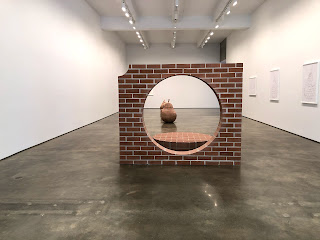 The above picture is of something that might be called a sculpture. 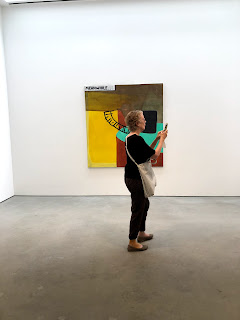 This picture above contains a "living" human being who is taking a picture. This was an accident. 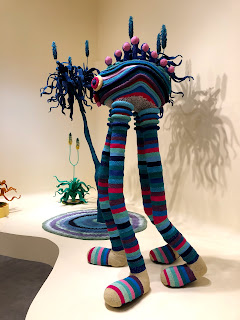 I was looking at these pictures after noon on the 18th of September 2019. 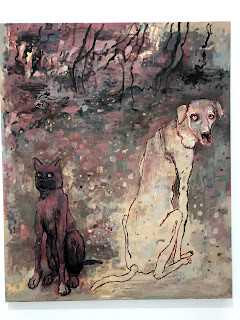 I had one verbal exchange with people in a gallery as a woman excused herself for talking about going to the dentist and I said I didn't hear what you were saying so you don't have to excuse yourself.  The woman explained that her father had been a dentist and she knew a great deal about dentistry--- all of which was in response, it seems, to a person who was behind the desk who it seems was complaining about going to the dental clinic at NYU where she had a procedure done by many students.  I said I was just at the dentists and he is very good. A third woman asked for his name and I wrote it out on a small piece of paper. I told the first woman that I had been going to dentists since I was a child and the name of the dentist I went to in Patchogue was Dr. Pierce, a terribly foreboding sort of name I only realized much much later after I had left Patchogue and heard that the doctor had lost a hand by sticking into a lawnmower trying to dislodge something or other. 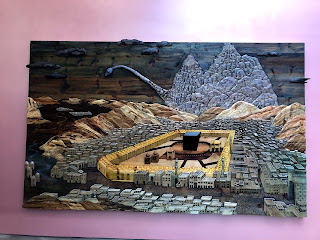 I am not sure what to call this something or other... 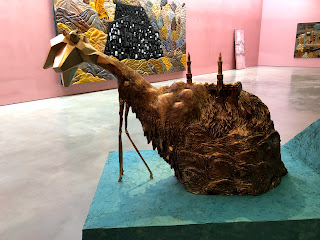 it comes from an artist working in Alexandria, Egypt.  I do not think I can claim that he was inspired by the novels of Lawrence Durrell
Posted by Thomas McGonigle at 10:01 PM 1 comment: