What else do I care about 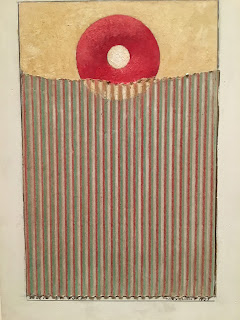 I saw Sun and Forest by Max Ernst at MOMA in a small show of his work and realized the pity of both time and war NOT doing their fine work in cutting down the number of works by so many of what one has to call modern artists... in particular in the 20th and 21st centuries the amount of art that has survived is unbearable to any thoughtful person.

In the world of books  the digital sledgehammer is ever at its destruction of the world of books so that now with books--- except for a few precious ones--- there is hardly any market for used books except through extremely large warehouses or the proliferation of individual sellers on Amazon and similar sites.

In New York City. the Strand Bookstore  continues in a fashion but it survives by being a destination store for people wanting to buy souvenirs of their visit to New York City.  The second-hand book section is assiduously combed by clerks and books no longer sit on their shelves waiting.

Increasingly as I will be doing books are simply put out with the trash... it is not worth one's effort to take them to the shops to sell and the shops if they are possibly interested mostly will not send a truck to collect the books as those books then have to be sorted and most of them will end up on the one and two dollar shelves for a time... 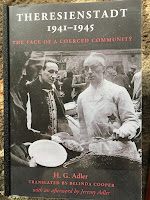 Adler began to save notes for this book when he with his family was sent to this "show-camp" by the Nazis.  Surviving unlike his famy the subsequent deportation to Auschwitz, Adler returned to Czechoslovakia and rescued his notes and after fleeing  that country for England began this massive and really first comprehensive description of A CAMP.
857 pages.  A book that will endure but few will read as it is very expensive and printed in a small edition by Cambridge University Press.  A book destined for the library YET  the sort of book that should be on the bedside of every thinking person because it is both a reminder of the horror of this camp--- which I trust if you are reading this blog--- are well aware was established by the Germans as a show camp to show how well they were treating the Jews contrary to the common belief  and I will repeat that: a reminder of THIS camp.  Adler concentrates on the experience of being in a camp.  He refuses every opportunity to simplify the story he tells: showing the full range of individual human response to the situation people find themselves in.  Even to site in anyway the details of those described is to needlessly limit the experience...

People avoid and are proud of their avoidance of the great big long books and I always take that this avoidance---every excuse seems so tiny, so mean as not even worth repeating--- as a pathetic need to think of the world as a simple place...Ulysses, Remembrance of Things Past, War and Peace, The Man Without Qualities, Death of Virgil, Parallel Lives 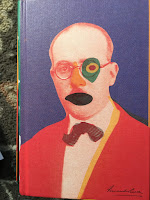 THE BOOK OF DISQUIET by Fernando Pessoa (New Directions) Translated by Margaret Jill Costa.   Some, a few, well know Pessoa... the writer who in some way has come to be listed with Proust, Joyce, Musil... Celine when such lists are made---  of course the most obscure and for me to list him thus might seem more eccentric than called for...yet...  there have been many versions of this book done into English in the last 20 plus years...  and everyone knows the story of Pessoa who never wrote in his own name but always wrote in the voices of a myriad of the invented and then there is vast prose book discovered in a large trunk and assembled by a series of editors... each one with a different approach...I had held to Richard Zenith's version published by Penguin but Zenith has complimented Costa for the quality of her translation... and this is physically a beautiful book with no dust jacket and a starling cover...a book of moods, a book to comfort on the sure way to the grave: the consolation is bracing as the English would say:
...to find people who are but a series of marginal notes in the book of life
...All pleasure is a vice because seeing pleasure is what everyone does in life, and the worst vice of all is to do what everyone else does
...every gesture is but a dead dream
...intelligence, a fiction composed solely of surface and error
...A Homer or Milton is not more than a comet colliding with the earth 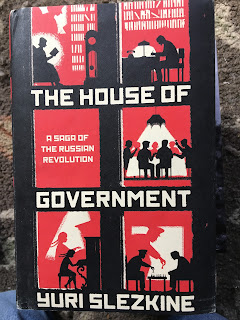 The house of the title is the large apartment complex in Moscow where the bureaucrats who ran the Soviet regime lived with their families during Stalin's time and after. And while it is a little wrong to compare it to War and Peace and The Gulag Archipelago--- as the blurb writers do--- there is a grandeur to it in the great length and in the detailing of the fates of true believers in Soviet Communism who with few qualms of conscience killed anyone who go in the way of the building of the communism in the Soviet Union and now in their own turn they are to be murdered by the very machinery they had created.  The genius of Slezkine is to individualize the murderers and the murdered... one is taken up by their lives and their inevitable terrible ends even for the few survivors who are  all  contaminated. 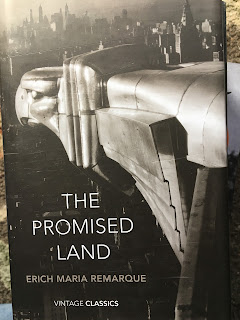 Maria Remarque was the second writer I came to in Patchogue after Thomas Wolfe and over the years I read all of his books that were translated into English as a result of the great success of ALL QUIET ON THE WESTERN  FRONT.  ---  I am ssure there are others who  followed his career:  THE BLACK OBELISK, THE ROAD BACK, THREE COMRADES...  THE PROMISED LAND did not get published in the United States ...

AND HERE I STOP FOR NOW AS THIS TYPING HAS AWAITED POSTING TOO LONG...
Posted by Thomas McGonigle at 1:00 PM 3 comments: