50 Years Ago: it begins this writing 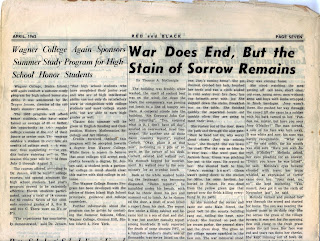 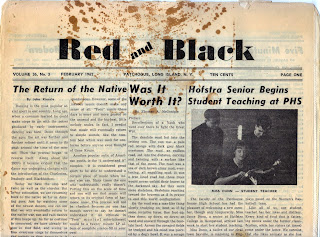 ONE
How it began.  Patchogue High School.  My Senior year.  I saw a blonde girl taking books out of a locker on the second floor.  I found out her name, Melinda Brady.  She was two years younger than me.  I could not figure out how to talk to her.  I had been reading about World War One and I had a picture history THE FIRST WORLD WAR edited by Laurence Stallings...
I began to write and a young man dies in France in the trenches on 6 November 1918, though the author recorded that he did have a thought of a girl back home....
I no longer remember how I came to give the story to Alfred Willis who was the editor of The Red and the Black but I must have and he published it.
I would see Melinda in school and I even danced with her once in gym class, never telling her of the story or what I... but then I thought surely she must have read it and while I added an L to the last name of the girl in the story who does not know what has happened to the young man in France.
TWO
As writers do, I now realize, her silence or the silence of everyone else in the school did not stop me and so the second story, now told from her viewpoint of when this young woman goes down to the train  station in a small Indiana town hoping to meet her returning friend, who of course is not on the train...
I had seen these small Indiana towns when I had been driven out to Beloit,Wisconsin that previous summer to look at Beloit College and I longed to live in one of those tiny town, no more than one stop light and to be sitting on a porch and now many years later, what I now know, I was thinking of being on that porch alone without my father, drunk in the afternoon yelling at the doctor next door to us on Furman Lane in Patchogue, my drunken father yelling at the MD MD mental deficient mental deficient.
And of course Melinda would be forever walking across the lawn and I would know and maybe she would know that on one of the maple trees in front of the house I had carved her name and the year 1962.
THREE
The other week I drove by that house on Furman Lane in Patchogue and the tree is gone.  Alfred Willis did not go to college but enlisted in the USMC and served two tours on the front line in Vietnam.  He came back entered the Catholic priesthood and then left.  He lives far away from Patchogue.  Melinda lives in Vermont with her third husband.  I live on East First Street with my wife Anna Saar  with whom I am very happy yet I remain faithful, still, for better or worse, and it is mostly for the worse, as any writer really knows, as the years go by, to that first moment in the second floor corridor of Patchogue High School when unable... I turned to the written word.
FOUR
The inevitable post script.  I did see Melinda when I came back to Patchogue from Dublin for the summer of 1965 just before my parents were sent into exile in northern Wisconsin.  Many years later...how I hate those words---many years later--- as they do not accord with how I hold all of this in my mind Melinda asked me how did you know my birthday?
I did not know that November 6 was Melinda's birthday but now I guess I know that she had read the story fifty years ago.
Posted by Thomas McGonigle at 10:36 AM

Elizabeth Frank wrote to me after reading the post and asked me to put this sentence from her email:"read your blog about Melinda and your beginnings as a writer. Seems all of a piece with who you are and has the never-endingness past-in-the-present quality of your novels." EF you might know is a very good writer who wrote a readable and important biography of Louise Bogan for which she received a Pulitzer Prize. She also as an insightful novel about Hollywood CHEAT AND CHARMER...also at this moment at work on what will be a very good novel set in Bulgaria