NOT UPON A TIME: a Bulgarian moment


Once upon a day like many days, Lilia responded to a beautiful black/white photo from Venice which I had put on Facebook of her (age 18) feeding the pigeons in San Marco after we had left Sofia in April of 1968, “I remember being happy to leave Bulgaria but the black and white photograph makes me seem like I am dead.” 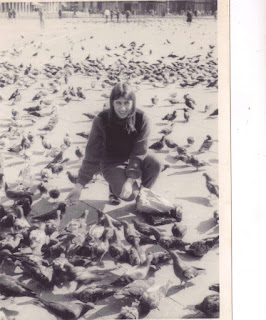 I also wrote at that time, Of course, all places are like no other place.
Both of us are dead in that time when we were on our way to Dublin by way of Paris and London.  All the people we stayed with from that time are now dead… and while I thought I would be able forever to retrace my steps in Paris and London I wonder if it would be possible.  In London we stayed in a hotel in Bayswater and then took the train to Dublin to be met at Dun Laoghaire by Eugene Lambe whose funeral I have heard described in ever diminishing detail as the years go by.
Lilia is wearing a black and red sweater I had bought for her in the Kings Road in London since she told me she was easily bothered by the cold and found that she had never been warm enough growing up in Sofia.
I am aware of myself only in the corduroy jacket which I had bought in Dublin on the north side after seeing a French boy wearing a jacket like this on the train on the way to Calais, once upon a time before this year. 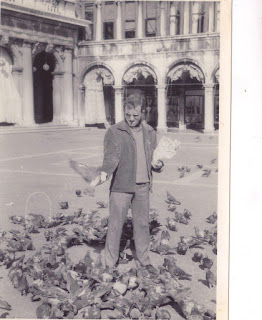 In a passageway between the Locanda San Stefano and San Marco I heard Bulgarian being spoken and I suggested we say hello to the man and woman but Lilia said in English you can’t talk to Bulgarians abroad, you don’t know why they are here…
Never would Venice be like this again when I, when we were on our way to Paris…at Easter, 1968 which we spent in a small village, Serifontaine--- during that visit we were taken to Dieppe--- a cold stony beach at night--- and Rouen for the train back to Paris and in the village square a too familiar reminder: a memorial to the war dead in Vietnam in both the 19th and 20th centuries---
Jean, the husband of Lilia’s relative by marriage---the daughter of the woman a few streets over from Ulitza Yordan Lutibrodski in Nadeshda who had married Ratcho--- you never met him back then, Lilia says, my father---  after Medy had divorced him--- was a French orphan from Algeria who read only the memoirs of Charles de Gaulle which he showed me in a fancy bound edition… he had been in the army and learned the trade that he worked at in a photo printing shop near Montmartre Cemetery, as I remember--- is now long dead--- and it was with his relatives we celebrated Easter at a long table under trees behind a village house… in the shade of shed while nearby large rabbits waited to be slaughtered in a few weeks.
In the years after, Lilia never visited the now a widow of Jean though her daughter once came to New York with a female partner, as we now say, wanting to buy knockoff Rolex watches on Canal Street… but here all the details just disappear into gossip poorly remembered
But how can Lilia write, “makes me seem like I am dead”?
BUT THE OTHER DAY I found myself in Virginia, in a park in a suburb of Washington talking to a man who announced he had written a Bulgarian movie without ever having gone to that country.  He had been to every country that bordered on Bulgaria but he was given the chance in Hollywood to write a 91 minute version of a three part Bulgarian epic entitled ASZPARUH, originally 323 minutes long, which was to be called 681 AD The Glory of the Khan.
I heard myself repeating something I have now been saying for more than 20 years: I went from the obscurity of Bulgaria to the further obscurity of Estonia and this guy went on to explain that they cut the movie a lot, moved scenes around and tried to make it so Americans could understand what was going on.  The Bulgarians had put up a lot of money and this was a small part of their celebration of 1600 years of the Bulgarian state…  it was sponsored by the daughter of the communist boss of Bulgaria Todor Zhivkov which lead on to another story about Zhivkov’s drunken son, Vladimir who was notorious for having thrown his first wife out of an upstairs window, breaking her back and paralyzing her for the rest of her life.  He married a second time it seems and was abusive to that wife though they had a daughter together.  She divorced him and fled to Greece but the husband, for obvious reasons, was given custody of their daughter.  The child was a sort of hostage and here is where Minton’s story became vague:  there was an American, Tom Marshall, who had been involved with the film and he somehow got introduced to a scheme to kidnap the daughter from Bulgaria and re-unite her with the mother. They were going to helicopter her out of the country.  It never happened as Marshall was warned, Jules had been told, if he did actually try to do this he would be eliminated and no one would care.
Here the story ended as Jules went over to talk to Sally who had been friends with Anastasia Moser, whose own life had been lived as a sort of hostage in Bulgaria while her mother and father G.M. Dimitrov lived in Washington.
All of this is ancient and obscure in the present moment of a park in suburban Virginia.
But in truth, this conversation happened twenty years ago and I was making it seem as if it happened yesterday but every moment only has the potential to become the past: the sure project that comes with being alive and which is designed to see that person, this me, dead.
As if I knew anything, could be said by another and why would anyone want to have been told of this conversation in a park in Herndon, Virginia, a park that…
Lilia would have had nothing of this.  Bulgaria existed for her only when I mentioned the word and she was forced to remember that yes she had come from that place and this is how she always phrases:  that place.
At one time I remember my father using that phrase when mentioning where his parents had come from and it was because back in that country there had been nothing for them to do except leave it and they didn’t exactly leave that country but were sent away from that country to this country and there was never a thought to go back to Ireland, since you had left that country or been sent away from that country when you were twelve and everyone who had a part in the sending away was long dead and there had been no contact with that country over the years except on St. Patrick’s Day when you had to agree with the ethnicity of your last name and celebrate its origin and while St. Joseph was the patron saint of Brooklyn since Manhattan had the monopoly on St. Patrick with both an old St. Patrick’s cathedral downtown and a new St. Patrick’s cathedral on Fifth Avenue…
But here, I find myself: 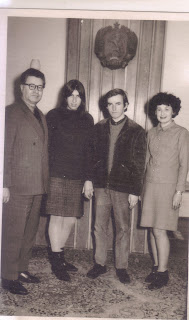 23 years old in the marriage palace in Sofia, the People’s Republic of Bulgaria.
The witnesses to either side of us are dead. Yordan was prudent enough to become a member of the Bulgarian Communist Party in August 1944, when that was still possible.  His prudence allowed him to become a lawyer and a small time fixer of problems for Lilia's mother who always had problems, as did most people in Bulgaria of one sort or another and a member of the party was essential in the fixing of those problems.  He told Lilia that in America lawyers had a person who did their typing for them unlike in Bulgaria where he had to do his own typing.  That was the extent of his knowledge about America.  He was a nice guy who later I visited in Veliko Tarnovo... he had been the person who found the police official that Lilia's mother could pay to have the permission for her daughter to marry an American.

Posted by Thomas McGonigle at 6:02 PM