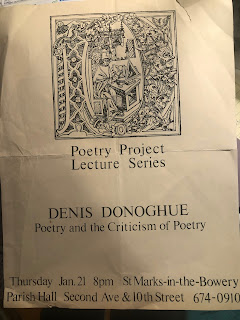 I first heard Denis Donoghue in 1964 when I attended his lectures on silence in Shakespeare while a student at University College, Dublin.  He began with that reply of Cordelia to her father that I need not repeat as anyone reading this will know that sentence... years later we became friends through little notes exchanged and then meals shared: costs carefully split to the penny. He became a not infrequent guest for dinner as it seemed he had time to come to our tiny apartment in the East Village of Manhattan as there were very few people, he said, at NYU who had an actual interest in poems and stories…

My wife and children always enjoyed his company which in some way is a commentary on then and continuing politically argumentative academic reality.

We remember vividly the time DD described his giving up classical singing--- his arm slashing through the air--- "I gave it up, I could not subject my wife and future children to the uncertain life of a singer; so now, not even singing in the shower."

And of course another time when my son and Denis agreed that Latin prose was quite boring when compared to Latin poetry…. I myself never really got beyond Caesar.

I am sure more distinguished people will write of his   many critical books and the arguments he pursued and was pursued by though nothing dates more than such.

Denis Donoghue's true legacy is contained in Warrenpoint.  It is his own story of growing up in a policeman's barracks in Northern Ireland and of how he came to be a very good reader.  The following I would suggest is always the center of that reading: "It did not grieve me that I lacked inventiveness , could not make up a story or imagine a sequence of thought requiring rhyme.  All I wanted to do was to observe a relation between myself and structures I had not invented... Mine was the intelligence that comes after."

Denis reiterated this once upon a time when he was asked to lecture at the St. Marks Poetry Project in the East Village of Manhattan on the future of poetry.  Someone in the audience asked him what poets should be writing about and in what form?

He declined to prescribe what a poet should write, "All of my work depends on what the poet created or will create."

On a very personal note: probably the last thing Denis Donoghue wrote was an essay on the Henry James novel “The Sacred Fount” which I had been unable to make sense of even after having been goaded to attempt to read it by the Spanish writer, Julian Rios.

When Denis was able, last year we talked on the phone and I asked him if he could explain how to read the novel or at least provide an approach to how to read, "After all you are the Henry James Professor" and we both laughed.

He begins his essay by quoting from a letter by Hugh Kenner to Guy Davenport which is from the collected letters of Kenner and Davenport which were edited by a friend of mine Edward Burns whose name I had included with mine---to share the embarrassment, really--- in the asking DD to explain "The Sacred Fount" as Burns also found the James novel impossible...

[Aside Denis reviewed---possibly is last published essay---,  this magnificent annotated collection of letters and over-looked the rather nasty comment on Denis by Hugh Kenner, a mark of the respect DD had for Kenner, I choose to believe]

I will accept and choose to believe that possibly these are near the last lines DD wrote and even if I am corrected, they invite a reader to read: "Reading one of James's later novels is like walking slowly through a gallery of modern art, paying gratified attention if possible to each painting. Many of the paintings distain to be asked what does it mean while issuing a strong invitation to pay attention. When I come to Chapter 8, I am not ready to be ravished, as I am when I read "Among School Children" and "Ash Wednesday," but after a few sentences, I give in."

Sadly, I never got the chance to talk more about this novel with Denis as I received a text message on April 7th from his daughter Emma, "Really sorry to tell you that Denis died in his sleep yesterday (having been unable to keep down much food these last months)."

I so wanted to "tease out" my continued difficulty with the novel, "The Sacred Fount"  and to remind him I  had first read that expression "to tease out" in a note--- in which he had replied to me then in Patchogue, New York back from my year at University College, Dublin--- about that sentence of Cordelia's...

I have left out all the personal information and/or gossip one acquires in the knowing of a person for a long period of time... of these days I must probably start by retelling when Alastair Reid, the poet and translator, and a woman friend came along with Denis to our small apartment and my wife poured the Irish whiskey for Alastair  as if it was wine: the consequences while not fatal are after all comic... or as my Whitney mother would being say, sounds like you're gonna become an Irish washer-woman...

Posted by Thomas McGonigle at 1:21 PM