Preface to another day of my walking  from THE WORKER by Ernst Junger (Northwestern University Press, 2017):

...And it is a comforting thought that, because of some secret correspondence, the development of more monumental means of destruction keeps step with the accumulation and conservation of so-called cultural goods.  The vicarious and derivative proliferation of these goods--- in other words, the business of art, culture, and education--- has acquired such proportions  that we can see the need to lighten our baggage, whose fundamental and comphrehensive extent is barely conceivable.  The worst is not that a circle of connoisseurs, collectors, snoopers, and curators gathers around every cast-off shell ever borne on the back of a living snail.  This has always been the case albeit to a far more modest extent..  Much more dubious is that from this bustle a set of ready-made values has emerged behind which an utter deadness is concealed.  We are dealing here with shadows of things, and advertising has been made into the central concept of a culture alienated from any primordial force.  (Written 1932---my emphasis)

Wednesday walking about:  at Zurcher Gallery a painting by Matt Bollinger caught the eye in its perfect representation the perfect balance of colours and shape...  so rare today even for this painter whose works usually seem to be on a larger scale and are often with much more in the frame but here I am glad of just the steps ether going up or going down... 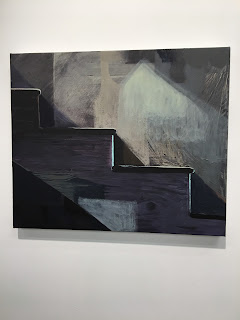 83
in contrast is the three floor show of "work" by MICHAEL LANDY--- now of the British Academy--which says something of that...basically scraps of political graffitti pasted to the walls... the accident of being taken up by Saatchi  that merchant museum in London...and reflecting nothing else than smart people gambling via art...  and SPERONE WESTWATER is one of the big players with their beautiful building on the Bowery--which in some way makes me long for the cheap bars that used to line that stretch pf the Bowery as this is only a slightly different sort of degridation... 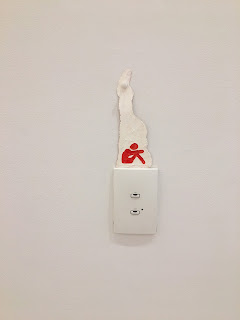 and while the owners don't foster cirrhosis of the liver, they infect the imagination or maybe they are only a  true reflection of what is the current moment of the liberal radical which demands vast amounts of money and attention but willfully without holding any sense at all of grandeur...of beauty 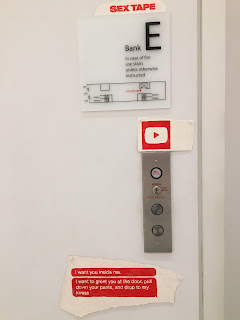 the text:  I want you inside me.
i want to greet you at the door, pull down your pants, and drop to my knees.

Posted by Thomas McGonigle at 12:40 PM No comments: