For 42 days I was in Bulgaria.
Not for a moment did I miss being in the United States of America. Of course I missed individual people.
What an awful debilitation to be labeled an American writer.
Would it be ever possible to simply say: I was  born in Brooklyn, New York,
lived in Patchogue a small village 60 miles from New York City on Long Island,
am in the world.
This has nothing to do with politics.  Every country in the world is as pleasurable, as inviting, as repulsive as the next. 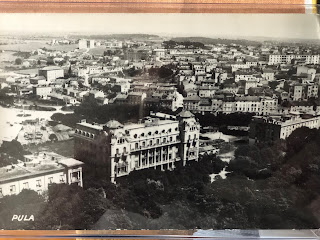 a hotel in Pula

but I live in Manhattan on East First Street and go on weekends mostly to the house my wife owns in New Jersey.  In many ways I have the best of all possible worlds if one is to be living in Manhattan.

So the matter is not a dreary disquisition about money or how an individual finds himself.  Rather it is question of how to define myself when I now say I have written three published novels and one of them was recently translated from its original English into Bulgarian.  Do I think of myself as an American writer?  The convention seems to be that either a passport, or a birth certificate determines the adjective that precedes the noun writer. 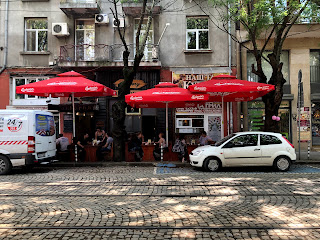 THE PAST
I could recite the list of American writers I have read and usually all of their books: Melville, Faulkner, Kerouac, Thomas Wolfe and on and on... but now save for a few novels nothing much remains... but what I am trying to understand how to continue with the writing

But the pictures are urging another approach.
The hotel in Pula, now in Croatia but in 1967 it was in Yugoslavia.  I had stayed there on a journey from Dublin  to Milan, to Venice, to Trieste as I was on my way to Turkey to visit friends but when I got off the train at Sofia in September of that year my life changed as I walked up Hristo Botev Boulevard and stopped to ask a question to a girl in a kiosk...

In June of this year that hotel in Pula and the town itself was the subject of a conversation with a writer translator from what is now Croatia who was also a guest of the Literature House in Sofia, Dinko Telecan.  Dinko had translated THE WHITE GODDESS, THE GOLDEN BOUGH of many books and was himself a novelist, traveler and poet. He knew the work of Nicolas Bouvier who is truly great and known only to a few---but that seems always the case in these United States... and after telling me Pula was a dump as was the hotel--- I persisted in the conversation and found a safe island in the work of Laszlo Krasznahorkai... now of course another name...and he knew --as he said--- of course and even I could echo that of course we knew the novels of Miroslav Krleza--didn't everyone--- of course I know I have just lost people thinking what a snob, what a name dropper--but so what::: I found THE RETURN OF PHILIP LATINOWICZ and ON THE EDGE OF REASON in my years in Patchogue... as at one time in even in the United States books by so-called foreign writers got translated and published... and of course he knew that James Joyce had begun his teaching career in Pula before going to Trieste and we both paused for Italo Svevo who in certain worlds is as well known as the name,  James Joyce...

78-
What I am trying to suggest is  that once one is  beyond the cold censorious academic and journalistic walls of today's United States of America there is a far brighter world of the literary imagination... that sees  and feels and knows a world that is far more interesting than what passes for a literary culture in the United States... there is not a single contemporary American writer---beyond James McCourt, Madison Smart Bell, Stanley Crawford, Tom Whalen whose new books I am waiting for  and of the dead I find it appalling that Hannah Green's THE DEAD OF THE HOUSE is not seen as essential reading as is Hal Bennett's LORD OF DARK PLACES and his very short autobiography THE VISIBLE MAN which was published in Contemporary Authors Autobiography Series Volume 15.  I was one a tiny select few who convinced Jon Rabinowitz to republish both of these books at his Turtle Point Press.

[][][] That Hal Bennett's novels and stories are not better known than Toni Morrison's tells me too much about what so-called American literature is all about and while not written with the linguistic inventiveness of say a Celine, all of Bennett's  work shares an essential attitude as once said by Celine---"you have to be a little bit dead to be really comic" while Hannah Green's novel and her Little Saint a non-fiction book about her long visits with the painter John Wesley to the small French town on Conques and an essay "Mr. Nabokov" create a small perfect oeuvre sharing the sophisticated enthralling stylistic verve of Nabokov's Speak, Memory.