For many years I have been writing a book about four men I contained in a book NOTHING DOING.  These are some pages...

George has been drinking again and I have been listening to him in The Grass Roots.    One of those nights when no one we knew came it.

It had been a long day with my patients.  I am old fashioned. They become part of my life even though I have them out there as I am supposed to.  But how to remain human, isn't that all anyone can ask for…

Once one of them, even back in Bulgaria, you know who I mean, became human for a moment and said to me, very quickly as we walked near Sveta Nedelya : just leave, or maybe it would be better to catch it exactly: just go away, he said

This man didn't have to say anything more.  It was all he was capable of.  I had helped him with his son who was very sick.  I won't tell you who he was.  It doesn’t matter but I knew that he was speaking for them.  I had had helped some of them when they had no one else to turn to:  for some reason they understood that nothing else worked.

George is talking about Bulgaria, a Bulgaria that no longer exists and even then it did not exist or at least people did not see it or even know it might exist.

I am still sometimes in Bulgaria.  You can not take a language out of the brain.  A new language does not replace the old language. Bulgaria under the communism:  people look at me when I say that:  none of that exists except in books.

But in my head, I want to say and I know they are holding back from saying: poor man.

I should tell you--- like I told George--- about going into The Guardian office in London having come back from Sofia and trying to talk about the Freedom Village that was set up in front of the Communist Party building in the summer of 1990.  I did not know how to make it vivid to these English people.  They had a man in Bulgaria.  They did not want another voice.  One voice was enough and he had his two or three inches somewhere in the paper.  No one that summer, that hottest summer on record in England, wanted to know about a Freedom Village in Bulgaria. It sounded like an American resort filled with people waving Bibles and shotguns, Clare told me and everybody in England knew enough about Bulgaria.  I had known Clare for twenty years.  That didn’t help.  At all.  She thought I was making it up and I wasn't trained to look at things like their man in Bulgaria.

And George embarrassed me by saying, you understand this Bulgaria, all these Bulgarias, without speaking the language.  You are as powerless as all this implies and is understood.  No one in the West will care what you have to say.  No one in Bulgaria will understand what you are saying.

If they find you still in Bulgaria, this man was telling me, you would be sent to the psychotic ward, George was saying.  That is how I was to understand this man's words: just go away.    I understood what they meant:  just go away.  They didn’t need to say anything more.  If I did not understand what they were saying they had a place for me in one of their hospitals…

To try to understand driving across the Air Force range--- I should have looked carefully at the map, the Barry M. Goldwater Air Force Range--- with a road like a wire bisecting it on the way to Barstow---  this time--- and  George nudging aside the man in Ajo who I see walking into a diner in a small strip mall just outside…

though George is going to talk about violent death also: torture, beatings, and how a man put on a dead man's clothes as if he always belonged in that clothing:  without the slightest twinge of guilt: something that is not in his or their vocabulary… but this man in Ajo… where has he gotten to?

Can I pretend I knocked on the door where he was staying or can I write, his car was not there in the morning?  Probably on his way up to Phoenix and then to get the lead out as he had to be in Chloride before it got dark.  His wife was waiting for him and the child was going to need a lot of love, and he would curl his lip as if anyone knew what the phrase:  she will need a lot of love.

Forget the local colour, George is saying.  You are not some guy stuck in a pig hole in the countryside.  I want you to move me about in your mind.  I want not to be fixed like some dead bug tacked to an exhibit wall.  I was happy, every day I was happy to see the new buildings going up in New York--- do you remember where we lived in Brooklyn?  None of it is there anymore.   The landlord moved to Florida.  The building was torn down and no one knows what it looked like.  That is not something to mourn, at all.  A person can always go to Paris to see things that stay the way they were.  Every city is different.  People get confused when they try to criticize a city with the standards of another city.  It is a way to go crazy.  You have to see what is in front of your face, first.    You go crazy if you can not look and see what is really there…   never forget that.

So throw in the picture from that cemetery.  A moment before the plastic flowers get blown apart to become burial rubbish against the barbed wire fence.  Make sure you mention the birthday candles arranged in the earth but not lit.  To be lit by lightning, you can suppose…memorial rubbish for someone going to a shop, buying, carrying, leaving behind, blown away… idle sentimentality, poor man. 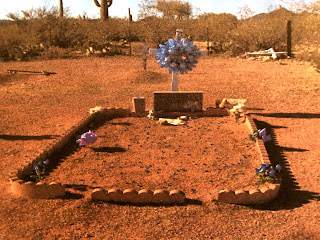 You told me once of walking around in Dublin and wanting to almost cry because it was all so painful… to have admitted that is sufficient.  No one walks around in New York talking:  do you remember when… the city is a wonderful drug wiping itself clear and wipes away those thoughts from the people who find themselves living here.  And it’s something to be proud of, not scorned like some pretend.  When I go Upstate Katya's sister has a photo book of OLDE NEW YORK.  She bought it because she thought she would impress me with her new found interest in history.  I wanted to tell her what Ed said in the Grass Roots:  Francis Bacon liked old photographs of masses of people because all the people in the photographs were dead, now, and I am alive looking at them.

While George did not know the novels of Gerhard Roth--- it is a permanent regret  we were not able to talk about them--- George did tell me he had read two books by Max Frisch:  Man in the Holocene and I'm not Stiller.

He did not want to forget his German.  While no longer having a desire to go to Germany the language allowed him to think, he said.  Only if you know German could you know what I am trying to say.  It is not that German is better than English but English is the language of the streets, of this bar, of the television, the language my patients speak to me, the language my children use and which I talk to them in.  German is my other language.  The language took me out of Bulgaria even during the Communism.  I have told you all of that and even in East Germany the language, though damaged by the communism, could not have been hurt at its center which even resisted the Nazis contrary to what some would have you believe.  People do not lose everything and yet rebuilt everything if there is nothing at the center.  That is a mystery, George would say.  I wonder if everything was wiped out in the United States if it could all be re-built.  To think of the United States broken into pieces and then divided into two competing systems and then re-united!  Americans do not know what it is means to lose.  Bulgarians only know about loss and it is nothing to be proud of, nothing is gained from the experience.  Germany is different, in some way, and it drives some people crazy but they can't do anything about it.