PATRICK MODIANO AND DEREK MAHON: TO BE MISSING

PATRICK MODIANO AND DEREK MAHON....
I had just read INVISIBLE INK, the newly translated novel by Patrick Modiano (Yale University Press, 2020) when news came of the death of the Irish poet Derek Mahon.
SUGGESTION: some have suggested the plague will last  for another year  so a wonderful time to read TWO Modiano novels a month and by the end of the year there will be a new one from Yale....
I have read now 25 of Patrick Modiano's short novels and the coincidence of these two readerly events seem to me to point to the genius of Modiano which could be too easily summed up in Gertrude Stein's famous remark: There is no such thing as repetition.  Only Insistence.
INVISIBLE INK--- a man remembering a moment when he went looking for a person--- is in so many ways a sort of description of every one of Modiano's novels, novels that hint often overtly  at autobiography or rather at the truthful necessary element that is in every so-called fiction, whether that fiction be by Joyce or Tolstoy or Proust of Celine or or or..
All of Modiano's novels are searches for something or someone who is lost to the narrator, or misplaced for poorly remembered... but then in the so-called real life are we not all accidents and our meetings with others, accidents.
All of the novels end in some sort of defeat, something found missing or just that phrase found missing and so the only next step is another book...
As to Mahon I met him on Dublin in 1965 and again in 66 and in other years but always in some way associated with a certain another: Eugene Lambe 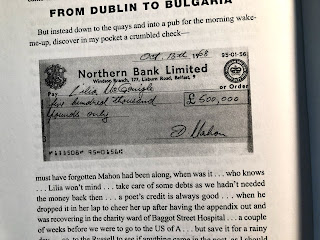