BY ACCIDENT more than 3 years after I had written this post and had not publish it, I have now published it. It lingered in the written but not published. Awaiting a day when I opened THE ADVENTUROUS HEART by Ernst Junger where I had put a printed out version of this post.  Today I had taken down Junger's book as I had been reading in Blanchot's THE BOOK TO COME since in a new novel by Patrick Modiano he quotes a passage from Blanchot on Diary and Story where Junger's book was mentioned.
To be arrogant: I learned about art by looking at it in galleries, in museums, in books, on walls of friends' houses, from gossip, from who knows where: just like Baudelaire I will claim.

I have never sat in art history classes which are nothing more than slide shows with an exam at the end testing your ability to ID pictures, worse than a police line up you could say.

So, I have come to the art of Mei Savage Brady: 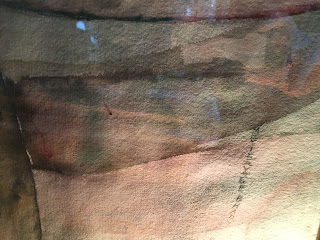 (a detail)
photographed badly, framed badly yet given the ability now to present a picture captured by a cellphone I am willing to state these two pictures are Mei Savage Brady's claim to not be forgotten... 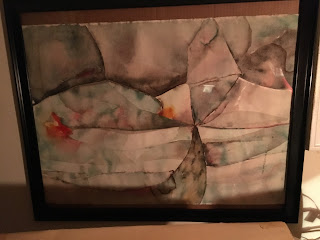 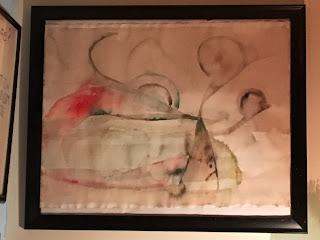 NOT TO BE FORGOTTEN

but most likely to be as she did not really scratch the earth beyond my rescuing these pictures, beyond the memory of an aging daughter and in turn two grand children who... but in the available sources all the soil fully necessary to fill in her grave out there again and again on Long Island but before I get to the burial---these paintings, water colour... as if bandages across a still leaking wound... she was almost guilt ridden sending them to be as they did not look at all like her other work: realistic, commercial, well- executed, entered into "juried shows", these abstractions of  a life that she did not lead, comfortable because of a successful husband (over-head garage doors, of all things, a nice guy..and she had unlimited money for materials, a grand studio, collection of books...and yet these pictures, send off to me, rolled up and never to be in handsome frames... how afflicted she was by classic allusions and then these bindings across the wound of her life--- that began as her family worked in a duck farm on Long Island and the language of Belorussia, not even Russian, but the overlooked center of both the whole of World War II and the Holocaust for good measure... but finally  these two pictures with the signature of the artist as a sort of talesman: this student of Philip Evergood, who at one time lived in Patchogue before burning to death in Connecticut--what  a fate for a teacher... but Mei was the only person I ever knew in Patchogue to describe herself as an artist but very quietly and she the mother of the girl who would have the mis-fortune to be my muse, Melinda, to be found looking into a locker on the second Floor of Patchogue High School in 1961-62--- so now you have the whole story, again... these corpse wrappings disguised as paintings...

Mei Savage BradyNoted North Fork artist and sculptor Mei Savage Brady diedFriday,  Oct. 8, at her home in Mattituck. She was 78 years old.  Ms. Brady's works were exhibited widely on Long Island and in New York City over the past 50 years. She was honored for her work by the Parrish Art Museum in Southampton, the Hecksher Museum in Huntington, Guild Hall in East Hampton, the East End Arts Council in Riverhead and the Smithtown Arts Council. Several of her pieces are in the permanent collection of the Islip Art Museum.  Muts. Brady was born Jan. 1, 1921, to Anthony and Mary (Choprowski) Savage in the hamlet of Brookhaven on one of Long Island's first duck farms. She graduated from Bellport High School in 1938 and studied painting and drawing in New York City in the early 1940s. In the 1950s, artist Philip Evergood of East Patchogue became her mentor. She painted throughout her adult life, and her most recent work currently is on exhibit at the Clayton & Libertore Gallery in Bridgehampton.  A spokesperson at the gallery described the Brady exhibit as a "new phase" of "semi-abstract" black and white paintings that had been completed since March of this year.  Ms. Brady also was an active environmentalist. She was instrumental in the founding of the North Fork Preservation Society in the late 1960s and, later, the creation of the North Fork Environmental Council.  A statement released by family members said: "All who knew and loved Mei Savage Brady will miss her endless energy, talent and generosity of spirit and mind."
Surviving are Ms. Brady's husband, Warren; her daughter, Melinda Munford Jaques of Water Mill; two sisters, Veronica Bergin of Westhampton and Helen Adams of Center Moriches; her brother, Benjamin Savage of Brookhaven; two granddaughters; and a stepgrandson. She was preceded in death by a brother, Frank Savage of Center Moriches.
A funeral mass was celebrated Monday morning at Our Lady of Good Counsel R.C. Church in Mattituck with Father Peter Allen officiating. Burial followed at Cutchogue Cemetery. Arrangements were made by the F.J. McLaughlin Funeral Home of Riverhead.


twoMei Brady painted and sculpted for sixty years. Her work is in permanent collection of Islip Art Museum, Long Island. She exhibited her work at the Parrish Art Museum, Southampton; Hecksher Art Museum, Huntington;  and Guild Hall, East Hampton.   She received an award in a juried show by Henry Geldzahler, former Curator, American Art at Metropoitan Museum of Art in NYC.   Submitted by Melinda Jacques, who houses the collection of her mother.


three
Goddess of the Sound.  This is the weekend that Teima, goddess of Long Island Sound, will take to the seas. For the last five months Teima has been waiting to get her feet wet in the Mattituck studio of Mei Savage Brady, an artist. Ms. Brady created Teima, a figurehead, from a six-foot-long piece of bass wood  It was her husband, Warren's, idea that a figurehead was what his 43-foot Island Trader ketch Arabesque needed. "It's part of the lure of the sea," Mr. Brady said. So are mermaids, and figurehead carvers, it turned out, are just as elusive.
"My husband looked for three years," Ms. Brady said. "He couldn't find anyone to make the figurehead. So finally I decided to do it."  Ms. Brady has painted, sculptured and carved, so making a figurehead combined her talents, she said. And because she displayed her work in East End galleries, why not also on East End waterways? Five extra coats of varnish were the only concession she made to Teima's marine backdrop.  Teima, goddess of Long Island Sound -- "the name just came to me," Ms. Brady said -- appears as a young blond woman in a multicolored short skirt. "Most figureheads are just the bust of a woman," Ms. Brady said. She decided to give her husband the whole body. But with a bit of excitement.  The finished figurehead is bare-breasted. "I didn't intend it to be nude," Ms. Brady said. "I was working on the anatomy and I got so involved with it I thought it would be a shame to destroy it by covering it up."  Mr. Brady said that was just fine with him.
four
Art; SURPRISES AT PARRISH SHOW By HELEN A. HARRISON  Published: December 13, 1981...  to the consternation of some artists, no firstplace award was made. The juror, Dore Ashton, a well-known writer on modern art who is a professor of art history at Cooper Union, instead picked seven artists for special mention, and the museum has opted for a group exhibition of their work next fall.
Mei Savage Brady's ''Shut the Mountain Door'' is also powerful, but makes its impact with ambiguity, appearing to alternate between two and three dimensions and even seeming to radiate an inner light from beneath its Lucite surface.

Fully accepting the verdict of disappearance while this person possessed of his eyes and his typing these sentences the ability to urge other eyes, other words remains for a moment, but for not that long as soon enough, soon enough