GOING TO PATCHOGUE and ZUKOFSKY 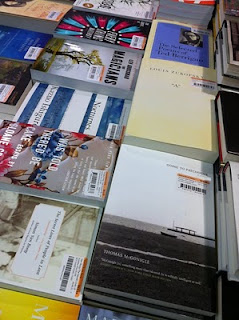 Last night I was in The Strand and noticed on the new books table this fortuitous juxtaposition.

Most likely it will not be there a day later and within the week both books will no longer be "new."

Zukofsky was an early subject of this blog since he was born a few streets south of where I sit.

Zukofsky had a summer bungalow in a town across Long Island from Patchogue.

GOING TO PATCHOGUE has found fewer readers. I did meet once a young man on Fifth Street who stopped me asking if I was who he thought I was and I asked him why he was stopping me: I had been looking for the blood near the police-station on Fifth Street, that you had written about.

Of course I am happy to see GOING TO PATCHOGUE again available but it is a source of an aching sadness as no one has been willing to publish what comes after: FORGET THE FUTURE, NOTHING DOING, JUST LIKE THAT (A Beginning and an End of the so-called 60s) or what I am working on now EXIT IS FINAL
Posted by Thomas McGonigle at 3:19 PM