DIPTYCH BEFORE DYING can this be read?


For some time now in the delusion of being a writer I have been writing what I thought should be called DIPTYCH BEFORE DYING, based on the two journeys --- to Newfoundland and Mexico City--- I made with my father in the weeks before his death in the summer of 1973...recently i have thought it should be a TRIPTYCH as I discovered the imagined death of my first wife in Venice in the Spring of that year, while in Venice on the way to Bulgaria.  At the beginning of August we were staying at the Hotel del Prado on Reforma, in Mexico City... so 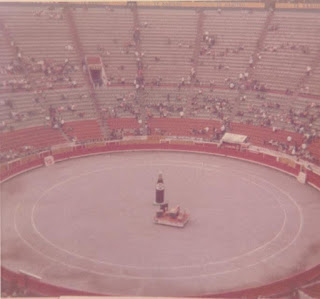 which I had taken during the intermission when these young men wheeled out this platform with a large Pepsi Cola bottle wobbling and after a few minutes in the rain they found as they tried to return the platform that the wheels had become stuck in the surface of the ring and additional workers were called into both push and pull the platform from the ring so the rest of the program could begin?
There would be no need for the evidence, Eduardo was saying,  I do not always believe what I see as I am sure you are also skeptical of those who retreat and that is the necessary military word for this defection from the art of the tongue, if I may wax on before your scorn melts me to a puddle.  You have seen something we would not have seen and for that I can only thank you--- though of what significance can it have as already it is a form of ancient history, due only to evaporate as the color of your photograph will fade or as in some cases burst into a sort of golden obliterating stain?

I wonder if this is readable and if there is anymore the possibility of seeing something like this into what was used to be called book form? Please, keepi in mind that this is a prepared slide from a longer manuscript.
Posted by Thomas McGonigle at 12:04 PM

I thought it was wonderfully readable. Thank you--

To me it looks like a masterpiece in the making. I'd probably stay with the title Diptych Before Dying. You could always put in an epilogue with the Venice adventures.
Good luck, and keep writing!

The title "Diptych Before Dying" is wonderful. Register it before someone steals it.

I am sure someone will steal the title... it is nice that someone has read the post but i live now in the reality that since I know no one in the so-called world of publishing.. no one with the power to publish books even though both of my books were well reviewed in the NYTimes and I mention that only because this is the only newspaper that seems to matter--- I do no exist and soon as is likely will be beyond the caring when all the papers that surround me at the moment will be bagged up for disposal as I will have been.